I am the extremely proud owner (renter) of a fire escape.

It is my first.

Having lived in both Chicago and Washington D.C., I consider myself well-versed in roofs and stoops – not to mention porches — but I am only just being introduced to the joys of a chipped black F.E.

Attached to the fire escape is my one-bedroom apartment, all housed in a three-story brick building that smells like Clorox. The clean smell was the single greatest factor in my decision to move in. I later learned the scent was my neighbor’s cologne, but that’s another story.

I first really became acquainted with my fire escape when my patient father, helping me move into the apartment, insisted I install my air conditioning units.

“Open up the window,” he said. I did and even thought to push up the screen. “Now crawl out.”

I peered out the window to the ten-foot drop below.

“Crawl out,” my father said, balancing the air conditioner on his thigh.

“Onto the fire escape.”

“What if it collapses?”

I put the tip of my index finger over the ledge of the window. I touched the rusting metal strips. I measured the two-inch wide gaps against my knuckles.

I leaned back into the room. My father raised his eyebrows.  Eventually he convinced me that a fire escape’s only purpose is to not collapse, so I clambered out and looked around. 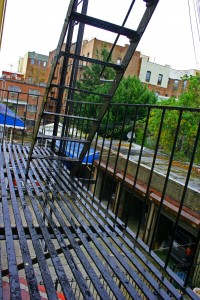 My window looks out on a concrete courtyard where old Greek men clean their cars. I could throw a discus to the back windows of my neighbors Across the Way. But in between are several leafy trees. They aren’t the maples I grew up with, but they’re big and knobbly and strong. They are the kind of trees that would look good with a few names carved in them.

My landlord tells me Astoria was put together before the war – I have not asked which – and all its buildings are low-lying. Five-stories is the most you’ll see here, so I have a big view of open sky. After my initial hesitation, my fire escape started to live up to its name. It became my escape. I sit here at night when no one can see me and on Sunday mornings with Martha Stewart’s magazine and some coffee.

Today I am on the metal bars, listening to the downstairs girl practice her saxophone and admiring the way even the city smells good after it rains.  Between the slats, I can see a puddle on the ground below. Three tawny birds are splashing in the water.  Birds need very little water to get clean. Someone should make a commercial about how eco-friendly they are.

There is something relaxing, in a private way, about sitting on a fire escape. It differs from a stoop or a porch. It is the only place to be alone outside in New York.

And mine hasn’t collapsed yet.